*(reviewed unit has W10 Pro; unit linked for US above has W10 Home)

The Gigabyte Aero 15 is a model we’ve seen a few times in recent years in different guises, and this new one has been equipped with some of the very latest notebook technology including an Intel 9th Gen CPU and Nvidia’s GTX 1660 Ti (though it shouldn't be confused with the even newer Aero 15 OLED). These seem to be sensible hardware choices for the given 15” form factor; the GPU demands less power and cooling than RTX parts, yet it should still offer solid frame rates at the native 1080p resolution, and the CPU looks set to be the new go-to model for 15” and 17” gaming laptops for some time.

The new Aero 15 Classic comes in four variants, YA (flagship), XA, WA, and SA (entry). Our sample here is the entry-level SA, so while it won’t be a performance champion we are hoping to be impressed in the realms of noise output, temperatures, and battery life given that the chassis is in theory designed to tolerate more powerful components (up to Core i9-9980HK and RTX 2080 Max-Q). As ever, regional restrictions may apply to when it comes to what SKUs are available.

The chassis design has a premium feel with lots of metal and few spongy or loose areas. The weight of the lower section and the smoothness of the hinge allow you to open it one-handed easily enough as well, and the lid’s logo illuminates a cool white when the power is on. The total weight of just over 2kg makes it suitably portable.

Overall we’d say the design is sleek and attractive; there doesn’t appear to be much wasted space. Just look at those tiny screen bezels, for example. These are always welcome, but note that Gigabyte continues to use the unflattering webcam position below the screen as a result.

The 1080p screen has an IPS display with an anti-glare coating. It carries some gamer credentials in that it has a 144Hz refresh rate, although the 5ms response time may put some off. The GTX 1660 Ti won’t always hit frame rates that utilise 144Hz to the full, but it often will in less demanding titles and/or if you drop to High or Medium settings. There is no variable refresh rate technology, but screen tearing is at least less obvious when the refresh rate is so high. Meanwhile, slight rubber cushions help to prevent the keyboard from marking the screen surface, and every single panel that leaves the factory undergoes individual Pantone calibration to the point where average delta E values are reported as less than 1, so colour accuracy should be high - we perform our own tests later, of course.

Moving down to the keyboard, Gigabyte has done a great job, offering keys with a very pleasant response. The design has been jigged to make way for an almost-full numpad (the 0 key is shortened) and full-size arrow keys. It’s weird at first getting used to this cluttered area, but we think many will appreciate the layout after a little while. The trackpad is unibody in keeping with a sleek and modern design, and although it’s large we can’t help but wish for distinct click buttons here, but you may feel different. Regardless of whether you have the Aero 15 placed on a desk or your lap, it’s very comfortable to use.

Furthering its gamer appeal, the Aero 15 has full RGB lighting implemented on the keyboard. There are two brightness levels available via the onboard adjustments, while effects and colours can be set via software.

With the rear set aside for heat exhaust, the sides play host to all the ports, making each of them easily accessible. Gigabyte has preserved Ethernet connectivity (Killer E2500) in this relatively thin chassis, and on the same side you also get a HDMI 2.0 output and a combined headphone/microphone audio jack. Meanwhile, the right has a UHS-II SD card reader, power input for the 230W charger, and Kensington lock. Wireless connectivity is dealt with using an Intel-based Killer Wireless-AC 1550i module.

There are three regular Type-A USB ports, two on the right (USB 3.0 AKA USB 3.1 Gen 1) and one on the left (USB 3.1 Gen 2). You also get one Type-C connector on each side for a total of two. The one on the right is a fully fledged 40Gbps Thunderbolt 3 port with four PCIe 3.0 lanes, while the left one offers DisplayPort over USB-C with Gen 2 speeds (up to 10Gbps).

Crunching the numbers here is a Core i7-9750H, the 9th Gen replacement of the venerable Core i7-8750H which has heretofore been the go-to CPU for laptops of this class (and indeed more powerful ones). While the two CPUs share a 6c/12t layout, the more optimised process on the newer CPU sees Intel able to increase clock speeds to 2.6GHz base and 4.5GHz peak Turbo (up from 2.2GHz/4.1GHz respectively), though whether the all-core frequency is similarly boosted remains to be seen and will also depend on Gigabyte’s cooling capabilities. Regardless, it’s the logical choice for the newest version of this laptop, as is the dual-channel 16GB of Samsung DDR4 it’s partnered with, especially as this is running at 2,666MHz, the highest officially supported speed. 8GB and 32GB are also available options, and 64GB is the maximum supported, but 16GB will be best for most.

Graphics workloads are handled by a mobile variant of Nvidia’s GTX 1660 Ti. Not equipped with ray tracing or AI cores but still benefiting from the Turing architecture’s general performance and efficiency improvements, it comes here in its most powerful (80W) mobile form with clocks of 1,455MHz base and 1,590MHz boost, showing Gigabyte is confident in its ability to keep this chip cool. The cores feed a 6GB GDDR6 frame buffer running at 12Gbps i.e. the same as the desktop part. This should be plenty capable of keeping up with the 1080p resolution.

For storage you only have a single SSD, so it’s good that it’s 500GB; at ~250GB you’d start struggling after fewer than five AAA games these days. Gigabyte has gone with the Intel SSD 760p here, an M.2 drive which uses the low-latency NVMe standard and a PCIe 3.0 x4 interface.

The cooling solution relies on two fans and two linked heat pipes. Vents on the underside allow cool air to enter from below, while warm air is dispelled through the rear vents that are angled up towards the screen, as the hinge mechanism is actually behind the vents.

Accessing the internals is relatively straightforward and gives you immediate and easy access to both memory modules and the SSD. A second M.2 slot supporting both NVMe and SATA drives is available for storage upgrades, but there’s understandably no room for 2.5” drives.

Gigabyte’s Windows install has a few useless bits on, but it’s not the most sinful of installations we’ve seen. The primary app of relevance is the Gigabyte Control Centre, which is a dashboard for system monitoring and management. There are colour management options for the display, for example, while Fusion offers per-key RGB lighting (for static patterns) or full-keyboard dynamic patterns as well as custom macro/shortcut options for most keys. It’s a bit clunky, though, and if such things are important to you it’s Razer and MSI (via SteelSeries) that you should concentrate on. There’s also a fan control area where you can choose between presets or even set a fully custom curve, which is a cool touch. Overall it’s a solid and useful bit of software that exposes the laptop’s key features nicely at a software level, but the UI and aesthetics need some attention. 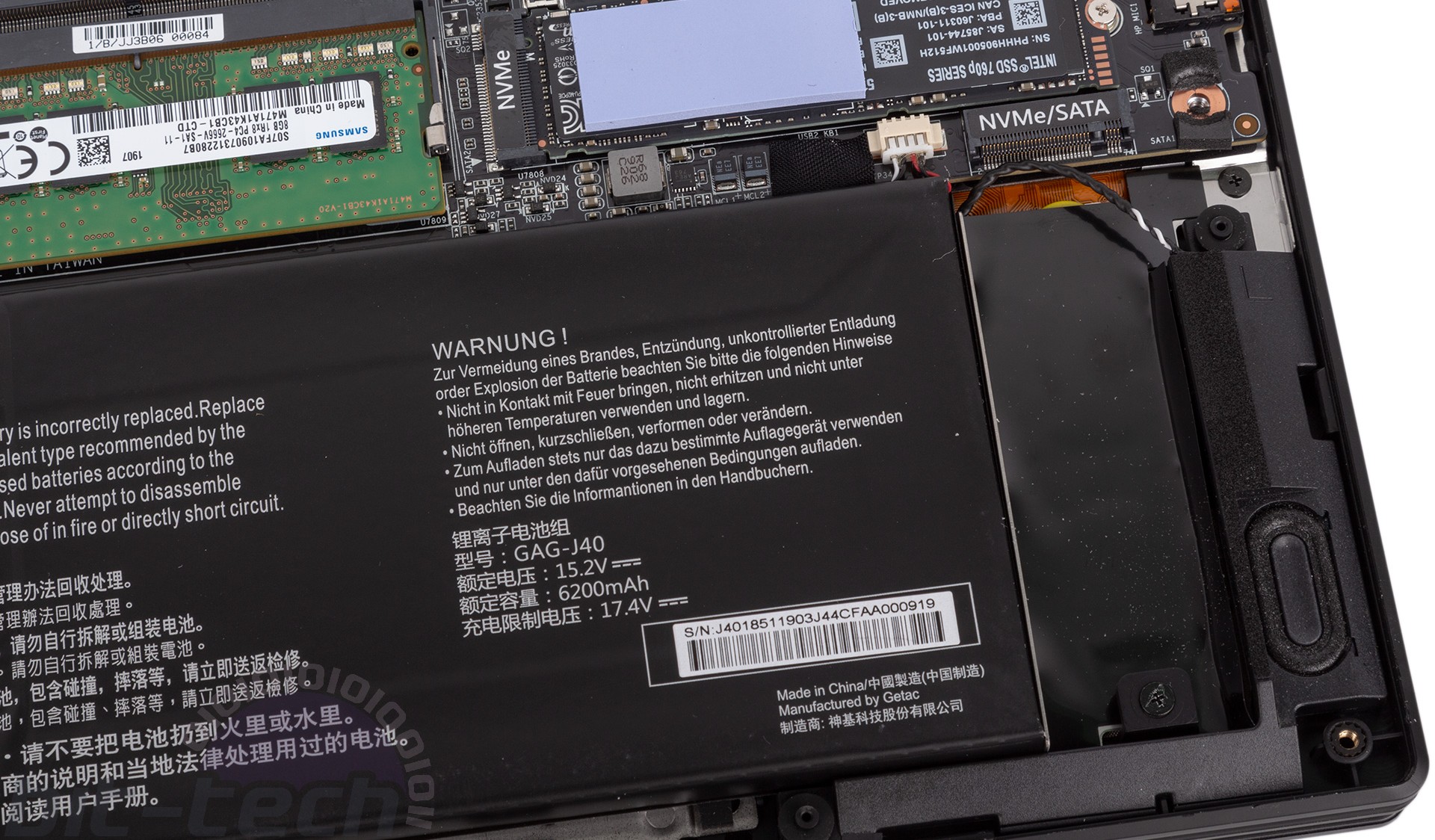 Gigabyte has gone with custom Windows power plans too, which is nice attention to detail. The unit will auto-switch to the equivalent of Power Saver when it’s unplugged, which we really like. By default, the GPU will cap to 525MHz once 20 percent battery is reached, however, so you may need to play around if you want to maximise portable gaming even more, as this will probably see your frame rates slashed to unplayable levels.

The Aero 15 Classic also features Microsoft Azure AI, a cloud-based solution for optimising power balancing and fan speeds dynamically in response to workload. You can choose whether to use online or local data and whether to upload your own usage data in order to benefit the shared pool, with Gigabyte naturally pointing users towards both using online data and sharing their own. Of course, if this gives you the creeps as it does us, you can easily disable the technology. Another nuisance is that its current implementation requires a desktop widget to be running at all times.

Gigabyte continues to use a very large battery capacity – 94.24Wh which is massive for a 15.6” unit. Hopefully this delivers good results in our battery benchmarking.

Gigabyte’s hardware choices appear solid; let’s see how the latest Aero 15 stacks up in the benchmarks both with and without the Azure AI functionality enabled.

Asetek as the ODM.

A beast from every angle, including price.

Six new laptop chips total, plus some desktop ones.